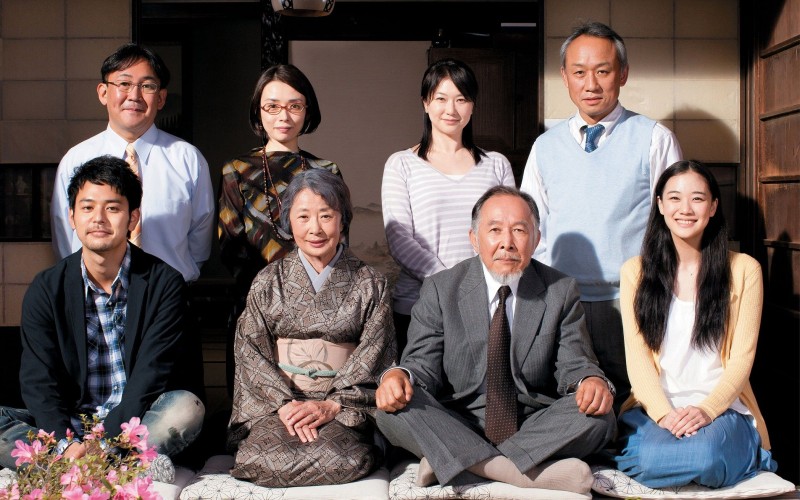 Added to List
Removed from List
The request failed. Please make sure you are connected to the Internet and try again. If this does not help, we will be happy to support you by e-mail at support@filmingo.de or by phone at +41 56 430 12 30
In order to create a list, please log in or register in case you do not have an account yet.
Subscription from EUR 7.5 per month Rent now: EUR 6

You can now preview the film during 3 minutes before rental.

In this film director Yoji Yamada bows down before his teacher and role model. Yamada was assistant director on Yazujiro Ozu’s «Tokyo monogatari», a moving family portrait set after the Second World War. In his remake, Yamada has made very few departures from Ozu’s masterpiece in order to update the story of ageing couple Shukichi and Tomiko to present day Japan. Once again, the pair decides to leave their quiet lives in the country to pay a visit to their children and grandchildren in Tokyo. Once there, they discover that neither their oldest son, a doctor named Koichi, nor their eldest daughter Shigeko - who runs a beauty parlour - has time for them: both are too busy attending to their everyday concerns. Even the youngest son went his own way. The old couple feel lonely and bewildered in the fast-paced metropolis. Adopting Ozu’s quiet observations of the family, Yamada’s version loses nothing of its topicality and, even sixty years after the original was filmed, the generation gap is still palpable. In fact, today’s young people are struggling to assert themselves in a far more confusing world, and this in a country where the scars of the 2011 tsunami still inform everyday life.

Yoji Yamada
Japan
122′
Shortly after assuming his post as food taster, Shinnojo loses his eyesight. The fish that was given to the head of the clan was poisoned. Prior to this, Shinnojo had held an inferior position in the ruler’s entourage. Realising that not only will he remain blind until the end of his days, but he must now relinquish his position and will need assistance for rest of his life, Shinnojo becomes dejected and melancholy. His wife, Kayo, is the only one able to prevent him from committing suicide: "I can’t imagine life without you. But, go ahead and kill yourself. If you do so, I will follow you immediately", is her response. Touched by her loyalty, Shinnojo gives up his plan to take his own life. Shortly afterwards, Shinnojo’s uncle advises him that, since he is no longer able to work, Shinnojo should ask Kayo to go to Shimada, the influential steward of the estate, and ask for his help. As time goes by, Shinnojo begins to get used to being blind. But then one day his aunt Ine tells him of a rumour she has heard about Kayo’s infidelity. Madly jealous, Shinnojo, who loves his wife and had always trusted her, orders his old servant, Tokuhei, to follow Kayo. Tokuhei discovers that the rumour is true. Having noticed that she was being watched, Kayo admits to having committed adultery with Shimada, explaining that the steward demanded her body in return for supporting Shinnojo. Throwing his wife out of the house, Shinnojo prepares himself for one last battle.
Added to List
Removed from List
The request failed. Please make sure you are connected to the Internet and try again. If this does not help, we will be happy to support you by e-mail at support@filmingo.de or by phone at +41 56 430 12 30
In order to create a list, please log in or register in case you do not have an account yet.

Rent this film with your subscription and watch it as often as you wish during the next 5 days.

filmingo offers a curated selection of arthouse films for streaming by subscription or individual rental. Run by the Swiss foundation trigon-film.

Sign up now for the monthly filmingo newsletter and stay up to date on all the new movies available for streaming as well as new categories and monthly film tips!

A server problem has occurred. Please try again a little later or contact us by e-mail support@filmingo.de or by phone at +41 56 430 12 30

The request failed. Please make sure you are connected to the Internet and try again. If this does not help, we will be happy to support you by e-mail at support@filmingo.de or by phone at +41 56 430 12 30

Unfortunately your browser does not allow cookies. Please change your cookie settings or use a different browser.